So we had a very fun week last week with seeing Richard Herring last week at the Leicester Square Theatre and The Cure at the O2.

Richard Herring used to be on T.V. with his then double act partner Stewart Lee. They had two shows over a few years called Fist Of Fun and This Morning With Richard Not Judy. Not many people seem to remember them but I was a huge fan even though I was only about 12 or so years old. After these programmes they seemed to fall into obscurity. Being fairly young and living in Milton Keynes I didn’t realise that they continued on in the stand up scene and I was blissfully unaware that Stewart Lee was behind the infamous Jerry Springer – The Opera.
Fast forward about ten years and we get to 2008 and I’m flicking through iTunes looking for podcasts to listen to on my tube journey to work and back. I come across The Collings and Herrin Podcast and make the mental link (Richard Herring has a thing about pronouncing ‘in’ with ‘ing’ such as Frankingstein and skelington). Needless to say I was thoroughly impressed and listening to Richard Herring’s clever, offensive and sometimes brilliantly childish humour after ten years was great fun. After having a look through his website I found that he was doing a run at a West End theatre.
I finally got round to booking tickets and we went last Tuesday and had a hysterical night. The show is called ‘The Headmaster’s Son’ and looks at Richard’s teenage life as the headmaster’s son (funnily enough). The young Richard compares himself to Anne Frank and reminds us all how it feels to be a moody teenager. He’s currently touring and if you can get to a show I highly recommend it.
Thursday found us over in Greenwich at the ridiculously gargantuan tent that is the O2. After having a few drinks and missing two of the support bands that we had no interest in seeing we thought we should at least give Franz Ferdinanz a shot. You’ll be pleased to know that we sat through two songs before we went out to get some beers. Most of this time was spent discussing how scared we were at being so high. We were in the upper tier and, as anyone who has been to the O2 will tell you, the arena is huge… and the upper tier is very high indeed. In fact… let me dig out a picture… 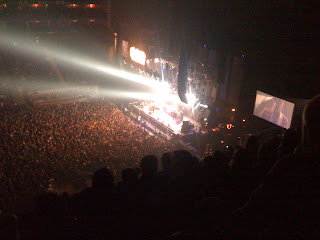 I felt a lot higher up than that picture looks.
So we went out to get some drinks and whilst standing around we were approached by a couple who explained that they had a spare pair of tickets for the lower tier that they couldn’t sell. They had been out during every interval to find people to give them to but no one had taken their fancy… until they saw us! Strange, I know, but quite sweet. So we ended up in much nicer seats as illustrated in this next picture… 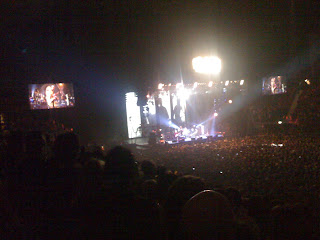 The Cure played for about 100 minutes which sounds like a lot but is actually a really short set for them. They played a lot of new stuff which was to be expected when the gig is put on by N.M.E. Robert then proclaimed that they would play a song from every album… a prospect that I was incredibly excited about as I thought it might mean finally seeing Bloodflowers live or possibly another one of their less played songs. I was a little disappointed with this as they ended up playing songs that they play quite often but missing out some really important ones such as Push and Play For Today. Jordan did spend the whole set shouting that she wanted Grinding Halt and finally got it in the encore and went a bit mental…
It was still very fun though as it always is seeing The Cure… I’m already looking forward to my sixth show. If you’re interested you can see the full set list here.
Getting home wasn’t fun and we arrived back at 1AM and had to be up at 7 the next day… fun.